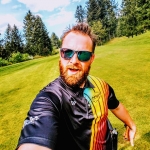 Hey guys, hope you are on here because you have heard good things about me……. LOL. I just to let you all in on why I do what I do in this amazing sport we all love called Disc Golf!!!! I use to drive by my local disc golf course (Shelton Springs) and think to myself, “that is the dumbest thing I have ever seen and you would never catch me out there!”…..well we see how i stuck to that statement. I started playing disc golf in 2014 with co-workers. I was so nervous the whole day leading up to going to the course after work, thinking to myself that these guys are going to lace these discs through all of these trees and I’m going to be the guy they are waiting on laughing at. That wasn’t the case, i caught onto the game fast and excelled quickly.

My first tournament was in 2014 at my home course tournament called the Shelton Showdown. I played in the intermediate division, and shot a hot final round to win my first tournament at my first tournament lol. I moved up to advanced after that and slowly raised my rating with the undeniable ups and downs that disc golf tournaments come with. I remained in advance disc golf for the rest of 2014 and 2015. My 2016 season was a vary successful one. With four 1st place and two 2nd place finishes I caught the attention of MVP Disc Sports.

In 2017 I became a sponsored disc golfer playing for an amazing disc manufacture and family. MVP Disc Sports was a milestone in my mind and i was out to show them i was worth the effort. I played a mix of Open and Advanced tournaments throughout the year knowing that i was going to make my way to the 2017 USADGC. I started off with an Advanced 5th place finish at the Las Vegas Gentleman Club Challenge as well as another Adv 5th at the Masters Cup in Santa Cruze, CA. I finished 26th out of 132 players at the USADGC, as well as went to MVP Head Quarters and met Brad, Chad and the rest of the heart and sole of the MVP Disc Sports family. Then end of 2017 marked the end of my Advanced career in disc golf.

My 2018 season was my first season as a professional disc golfer. In my life outside of disc golf my career took a different turn in which I needed to spend more time at home than on the road. I was able to get my first career Pro win at the Woodland Creek Classic as well as getting to go to my first Gyropalooza!!!!!!! I didn’t have much time for media through the year and didn’t have much time to practice on top of all my work. I haven never really thrown through the winter and have always taken time away form the sport between seasons. I have got to where i am purely on natural abilities and that is going to change!

My 2019 season has already begun. I am playing every day and am going to get into top physical shape to be a competitor for the season. I will be traveling to every NT and PRO Tour events on the west coast including the MVP Open. I will have my good friend with me the whole way with a camera in his hand capturing all the ups and down on the road. I plan on making videos of my adventures on the road and releasing them for everyone to see my shenanigans on and off of the course. I cant wait to meet more MVP fans on the road and have been so thankful for the support they have all showed me!