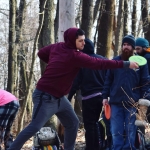 I started playing in summer of 2012. My buddy and I were home from college and he had heard about it from the ultimate team. We bought some super over stable drivers and learn very quickly we didn’t know what we were doing. Once I figured out how to get the disc to go 250ft I was hooked.

I had a course near my college in East Stroudsburg PA and started playing and practicing whenever I could. I watched every YouTube disc golf video I could find. I got kicked off of the football field once or twice while doing field work by the football team.

I wouldn’t have found organized disc golf if I didn’t run into a bear.
That’s right. I was coming down the path of a hole. I look up and 100ft away is a black bear. It started running at me. I dropped my bag and took off down the path which happened to be the fair way of another hole. I see two guys at the tee box and let them know what happened. Luckily we saw the bear take another path. Then and there my buddy Mike gave me the name Dan Running Bear. He also introduced me to the Lehigh valley disc golf club and my competitive nature took over.

I started playing tournaments in 2016 and turned pro half way through the season. I learned a lot form the local pros and have a lot of fun travelling around the northeast with everyone.

I am very excited for the 2019 season and very grateful to be a part of Team MVP.