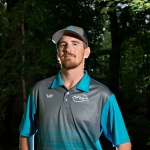 I started playing Disc Golf in the summer of 2001. I was 17 years old and had never heard of disc golf until one of my best friends (who was about to leave for the Army) bought a disc with a gift card he had won in our Youth Group at church. We played Lenora Park on a windy day and I used a flimsy little Frisbee. I didn’t like it but my buddy bought another disc and gave me his 1st one before he left. I’ve been hooked ever since.

When I went off to college on a wrestling scholarship, I found myself nearly an hour from the nearest course. I got some other wrestlers interested in disc golf and we would make the long drive to play a couple times a month. I think not being able to play often made me hungry for the game. The next couple of summers I hit up local dubs at Redan Park almost every week. In March 2004 I played my 1st PDGA Event, and then 2 more in the summer, all in the Intermediate Division.

On October 17, 2004 we had a Sunday off from practice and heard that the US Disc Golf Championship was happening 2 hours away and we could go watch Ken Climo play! There weren’t disc golf videos on YouTube so we had never seen him or any of the great players throw. But we all had discs with his name on them. It truly was a Life Changing moment for me. It was like going to my first Braves/Falcons game and getting to stand on the field and watch it. There weren’t spectator ropes like there are today, so we literally walked right behind Climo, Michael Johansen, and I think it was Ron Convers in that hat!

I asked around that day to see how a person could qualify for that. I was told to join the PDGA and that once I was good enough, I could play in a qualifying event. I joined a few months later and started playing in the Open Division before I had a rating. I floated to the Advanced AM division a couple times but mostly just took my lumps in Open. I cashed in 4 out of 13 Open Events. The next year I cashed in over half of them.

14 Years of playing in the Pro Division and over 100 PDGA wins have taught me a lot about disc golf and even more about myself. I love this game and the challenges that it constantly presents. Joining the Gyro Family in 2018 was a huge leap for me that has already been paying off. I can’t wait to see where my game goes in the next 14 years!