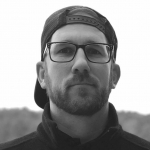 Mike is an artist born and raised in Western New York. He enlisted in the United States Marine Corps and deployed to Kuwait in 2002 in support of Operation Iraqi Freedom and Operation Enduring Freedom. While getting his Associates in 3D Animation after his 4 year enlistment, he was introduced to disc golf in 2006. Mike is currently the Art Director for MVP Disc Sports. He joined Team MVP in 2018 and spreads the GYRO® love in and around the Carolina’s.

Main bag that I use for both tournament and casual rounds. Practice like you play!

Most Used For Tournaments and Casual rounds
Color Black